Posted by Cai Studio in Uncategorized on March 30, 2017

In September 2017, the Pushkin State Museum of Fine Arts will present leading international contemporary artist Cai Guo-Qiang’s first solo exhibition in Russia: Cai Guo-Qiang: October. A reflection on the 100th anniversary of the Russian Revolution, the ambitious body of work originally created for the exhibition will transform the main exhibition areas of the museum.

The exhibition is a comprehensive introduction of the artist’s diverse yet distinctive practice to the Russian art world and local audiences. Artworks include large-scale outdoor and indoor installations, gunpowder paintings, a multi-media video installation, and small-scale sculptures and sketches. Upon entering the courtyard, visitors are greeted by a grandiose outdoor installation on the central staircase leading to the entrance of the museum, titled Autumn. A man-made mountain composed of birch trees and hundreds of baby cradles donated by Moscow residents, towers over the visitors and offers an astounding visual impression. For some, it will evoke a famous scene from Battleship Potemkin (1925) by Sergei Eisenstein. 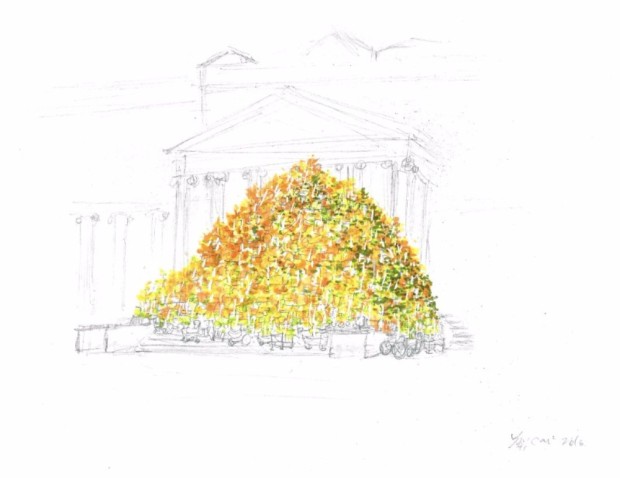 The various artworks trace the artist’s personal journey: growing up in Communist China, later moving to Japan and now residing in the US, he has never ceased to expand his artistic activities to various parts of the world by collaborating with local communities, which is an important part of Cai Guo-Qiang’s projects. Ordinary people are often involved, and are able to relate to his artworks on a deeply personal level. In Moscow, Cai Guo-Qiang will continue to pursue this artistic methodology, and will create two 20-meter-long gunpowder paintings and one calligraphy on silk, all involving the participation of local residents. With his signature medium of gunpowder, Cai Guo-Qiang continues to transform this ancient Chinese invention, approaching it with modern technology and a contemporary attitude. His creative process comments on the continuity of history, its everlasting quality, which is also a theme evoked in this exhibition.

Marina Loshak, Director of the Pushkin State Museum of Fine Arts:
“The exhibition, dedicated to the Centenary of the Revolution, will be created in the form of a dialogue between contemporary art and the architecture of a classical museum, a finished work and the history of its creation, past events and the hopes of today.”

Conceived upon the centenary of the October Revolution, the exhibition considers the subjects of history, revolution and utopian dreams. According to Cai Guo-Qiang, “These topics should not stay as grand narratives of ideologies or social systems. Instead, we need to discuss more specifically how ‘the people’ is composed of many individuals. Whether prosperous or unfortunate, history is created by individuals, who must take responsibility and assume consequences. ‘Why do people have ideals?’ ‘How do we realize them?’ These kinds of questions are not only directed at the past, but also at the present. They are not only directed at China and Russia, but at the entire world.”

About the Pushkin State Museum of Fine Arts

The Pushkin State Museum of Fine Arts is a museum complex that is currently in possession of the largest world art collections in Moscow, Russia. Today, around 700,000 art works from different epochs are present in the Pushkin museum’s collection, ranging from Ancient Egypt and Greece up until the beginning of XXI century. The assemblage of XIX-XX century French art is most exceptional in the museum and one of the most distinguished ones in the world. The Pushkin State Museum of Fine Art attempts to engage modernity and classic art works in a mutual dialogue, as well as offer its original perception on widely recognized art pieces.

Posted by Cai Studio in Uncategorized on March 15, 2017

The Prado houses one of the world’s greatest painting collections, and holds the most comprehensive and definitive collection of Spanish painting and sculpture. It is especially known for its collection of works by Titian, Bosch, Rubens, El Greco, Velazquez, and Goya.

Inspired by the spirit and glory of painting that resides in this 200-year old museum’s collection from the Spanish Golden Age, Cai Guo-Qiang embarks on a journey to discover the spirit of his own painting, and raises questions on the current predicaments of contemporary painting. By engaging in a dialogue with the Prado’s expert staff and collection, he strives to establish his roots in the painting tradition. Through the works in this exhibition, he seeks to re-envision the spirit of painting, while remaining true to his methods.

Visitors will learn about Cai Guo-Qiang’s enduring dialogue with El Greco, which has inspired him from a young age. This includes Cai’s early paintings that were heavily influenced by El Greco, and documentation from his 2009 pilgrimage that retraced El Greco’s life from his hometown in Crete, to Venice, Madrid, and finally to his resting place in Toledo.

Cai Guo-Qiang will use his unique artistic method to demonstrate his pursuit of the spirit of painting found in the techniques, subjects, and sensibilities of great masters such as Titian, El Greco, Velazquez, Rubens, and Goya. Through more than twenty gunpowder paintings of varying scale, visitors will witness the artist’s experimentation with painting techniques and local gunpowder materials, his sketches, and in depth research that reveal the process behind each paintings on display.

Beginning in late September this year, Cai Guo-Qiang will create the majority of paintings on-site in the historic Salón de Reinos (Hall of Realms). Over 400 years ago, Rey Planeta (King of the Planet) Philip IV received envoys from every realm in this formidable venue. He commissioned the most eminent painters in Spain and Europe, including Velazquez, to create paintings for the Salón de Reinos, engaging these masters in fierce artistic competition. The Hall was later transformed into a military museum. For Cai Guo-Qiang, creating gunpowder paintings in the Salón de Reinos becomes a site-specific event, one that travels through time, revisiting shadows of the distant past and challenging the imagination and creativity of the present day. At dusk on October 23, Cai Guo-Qiang will explode the immense artwork The Spirit of Painting, which will be the centerpiece of the exhibition.

José Pedro Pérez Llorca, President of the Royal Board of Trustees of the Prado Museum, and José Manuel Entrecanales, Executive Chairman of ACCIONA, signed an agreement of collaboration today to offer support for the exhibition. Director Zugaza and the artist would like to extend their sincere gratitude to Mr. Silas Chou and Elena & Alberto Cortina for their special contributions to the exhibition.

About the Prado Museum and the Salón de Reinos

The Prado was established in Madrid, Spain in 1819, and is recognized for having the world’s greatest collection of paintings; it is also the museum with the most comprehensive and definitive collection of Spanish painting and art. Its collection currently comprises more than 30,000 historically significant pieces, around 8,000 of which compose the highest quality collection of painting in the world. The Prado is especially renowned for its significant collection of Titian, Bosch, and Rubens, as well as its comprehensive collection of the three great painters of Spain: El Greco, Velazquez, and Goya. Since the 20th century, the Prado has continued to expand and renew itself, and is now the singular most important hallmark of Spanish culture and art.

The Salón de Reinos (Hall of Realms) was built between 1630-1635; it is one of the very few structures that remain of the Palacio del Buen Retiro (Buen Retiro Palace) of Philip IV of Spain (1605-1665). The name of the Hall originates from the coat of arms of the 24 kingdoms that composed the Kingdom of Spain under Philip IV. The Salón de Reinos once housed the largest collection of paintings owned by Spanish royalty, all of which have entered the Prado’s collection. It was later transformed into a military museum until the early 21st century, when the Spanish Ministry of Culture designated it to become part of the Prado. In 2016, the Prado announced that Pritzker Prize-winner architect Norman Foster would direct the renovation of the Hall, currently set to begin in late 2018. Philip IV once received the envoys of countless “realms” in the very space where Cai Guo-Qiang will create gunpowder paintings; he also commissioned the most eminent European painters at the time to create paintings for the space, including masterpieces such as Velazquez’s tour de force The Surrender of Breda.

Cai Guo-Qiang was born in 1957 in Quanzhou, Fujian Province, China. From 1981 to 1985, he trained in stage design at the Shanghai Theater Academy. His artistic expression spans multiple mediums including painting, installation, video, and performance. While living in Japan from 1986 to 1995, he explored the properties of gunpowder in his drawings, an inquiry that eventually led to his experimentation with explosives on a massive scale and to the development of his signature explosion events. Drawing upon Eastern philosophy and contemporary social issues as a conceptual basis, these projects and events aim to establish an exchange between viewers and the larger universe around them, utilizing a site-specific approach to culture and history.

Cai’s accolades include the Golden Lion at the 48th Venice Biennale in 1999, the Hiroshima Art Prize in 2007, and the 20th Fukuoka Asian Culture Prize in 2009. In 2012, He was honored as a laureate for Lifetime Achievement in the Arts in Painting by the prestigious Praemium Imperiale, an award that recognizes lifetime achievement in the arts in categories not covered by the Nobel Prize. In the same year, he was selected as one of the five artists who received the first U.S. Department of State Medal of Arts award for his outstanding commitment to international cultural exchange. His more recent honors include: the Barnett and Annalee Newman Foundation Award in 2015, the Bonnefanten Award for Contemporary Art (BACA) 2016, the Japan Foundation Award in 2016, and the Asia Art Award in 2016. Cai also served as Director of Visual and Special Effects for the Opening and Closing Ceremonies of the 2008 Summer Olympics in Beijing.

For the past three decades, his art has been featured in almost all major international exhibitions, and he has held solo exhibitions in numerous world-famous art institutions, among them Cai Guo-Qiang on the Roof: Transparent Monument at the Metropolitan Museum of Art, New York, 2006 and his retrospective I Want to Believe, which opened at the Solomon R. Guggenheim Museum, New York in 2008 and later travelled to the National Art Museum of China and the Solomon R. Guggenheim Museum, Bilbao, among others. In October 2013, Cai created One Night Stand (Aventure d’un Soir), an explosion event for Nuit Blanche, a citywide art and culture festival organized by the city of Paris. Also in 2013, his solo exhibitionDa Vincis do Povo, went on a three-city tour around the country in 2013. Traveling from Brasilia to São Paulo before reaching its final destination in Rio de Janeiro, it was the most visited exhibition by a living artist worldwide that year with over one million visitors.

On June 15, 2015, Cai realized his most recent explosion event Sky Ladder off of Huiyu Island, Quanzhou, China. His latest solo exhibition, Cai Guo-Qiang: My Stories of Painting opened in September 2016 at the Bonnefantenmuseum Maastricht in the Netherlands.

He currently lives and works in New York.