Posted by Cai Studio in Uncategorized on November 7, 2017

Historic Exhibition Explores the Past and Future of the Medium 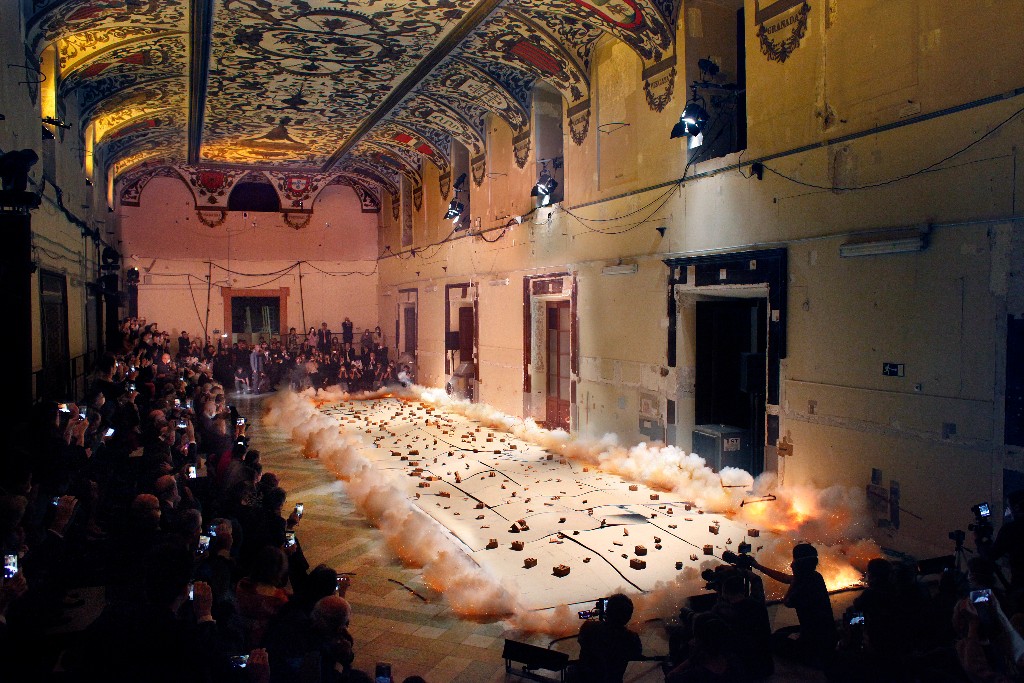 The Spirit of Painting arose from the artist’s lifelong admiration of El Greco, and is Cai’s first solo exhibition focused solely on painting in over 30 years. For the first time, Cai measures himself against the great masters of the Western pictorial tradition through his innovative and unusual artistic technique. The Spirit of Painting will be on view through March 4, 2017.

For The Spirit of Painting, Cai transformed the museum’s Hall of Realms into his studio, producing eight works inspired by the memory of the former palace of Philip IV and in dialogue with the Great Masters represented in the museum’s collection. The artist’s residency, which took place in the weeks leading up to the exhibition’s opening, concluded on the 23rd with the creation of The Spirit of Painting, a monumental painting measuring 3 x 18 meters. 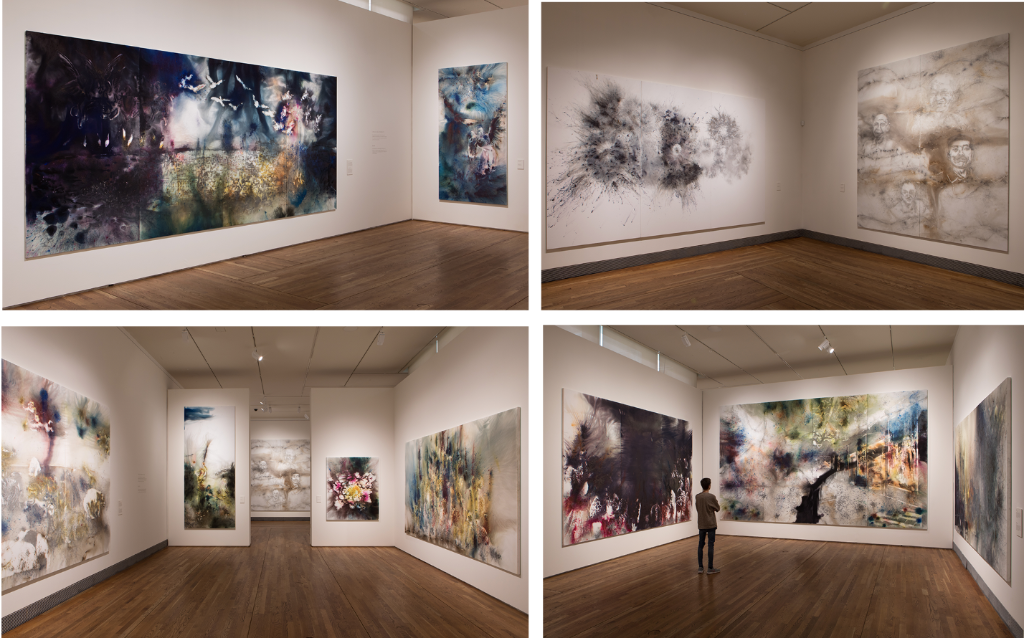 In addition to nineteen paintings made in New York, Cai created The Spirit of Painting and seven other works in the Hall of Realms. Also on view are oil and acrylic early works, a selection of sketches, and drawings on matchboxes by the artist’s father, Cai Ruiqin.

The Spirit of Painting will allow visitors to explore Cai Guo-Qiang’s lifelong dialogue with the Western pictorial tradition, particularly the spirit of El Greco. This dialogue began during Cai’s years as a student and has continued to the present day; a continuity evident in the selected early works and documentation of the 2009 journey Cai undertook to retrace El Greco’s travels from his native Crete to Venice, Rome, and, finally, Toledo.

The exhibition is an extended defense of the particular characteristics that define the “spirit of painting”: the artist’s sensibility, craftsman-like skill, and the sense of adventure when starting work on a blank canvas. The exhibited works broaden Cai’s own singular spirit of painting and, at the same time, consider a way forward for contemporary painting. They form a rhythmic progression that evokes a compositional structure common in classical and modern Chinese literature and music. This formula, known as Qi cheng zhuan he, is present in the different sections of the exhibition: 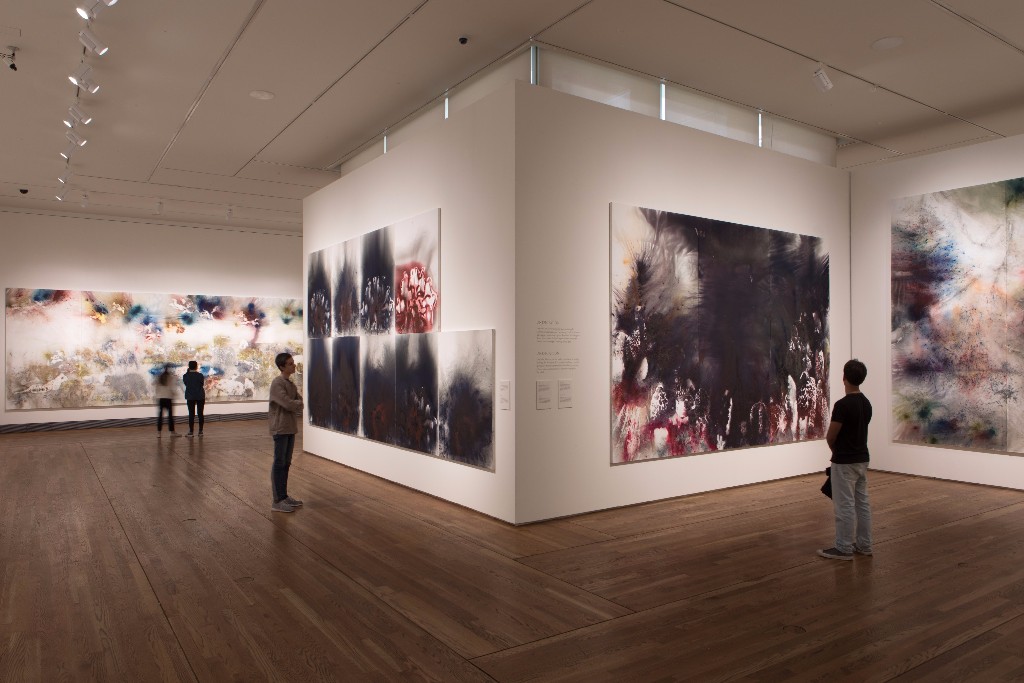 Rise (Qi)
The first room illustrates the relationship and dialogue between Cai Guo-Qiang and the spirituality of El Greco. This connection inspired Cai in the early stages of his painting career, and now acts as the beginning of the exhibition.

Day and Night in Toledo was the first work that Cai created in the Salón de Reinos. Cai reimagines what he saw when revisiting Toledo in early 2017 — the city from night to dawn, morning to sunset, and back to the night. The town, cathedral, valleys, and skies in the painting look as they did in El Greco’s time, forming a mirage on canvas. “As if, through an El Greco-esque energy, the past and present are overlapping in an undefined time and space,” Cai described.

Painting El Greco’s Apostolado, No. 8, 9, 6, 3, 10, 7 emanate a sense of ceremony unique to classical painting. For each Apostle, Cai arranged gunpowder between two canvases, laid face-to-face on the ground. Ignited together, two paintings emerge—the lower canvas is more figurative and the upper one more abstract. “As though extracting an imprint of spirituality,” Cai explained.

With the group of studies In Search of El Greco, No. 3, 6, 8, 9, Cai experiments with gunpowder and explosion to better understand El Greco’s painting technique, including the flow and expression of color, light, and energy. 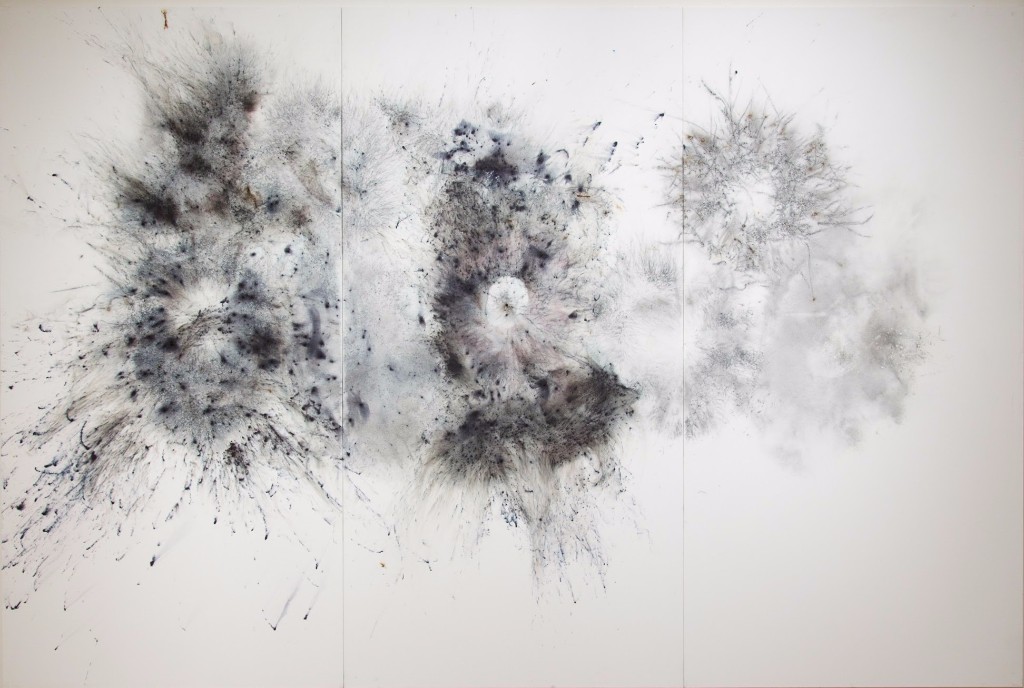 Development (cheng)
The second room inherits the spirituality of Rise, but is more personal and pure in its artistic expression. The works displayed are dedicated to the artist’s loved ones who have passed away in recent years.

In Black Ceremony, Cai explodes on a blank space his desolation and helplessness at losing his hundred-year-old grandmother, his father, and father-in-law in the past few years — it is more abstract, more boundless; in The Distant Clouds, he uses raw black gunpowder and gunpowder fuse from Valencia to express his pining for and remembrance of his loved ones. Three other abstract paintings convey the surging of emotions, and at the same time reveal the artist’s painstaking study of the materials and techniques involved in painting with gunpowder. 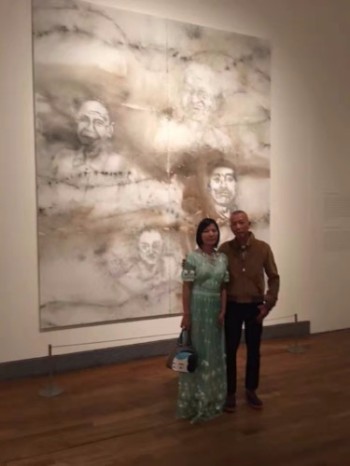 Cai Guo-Qiang and and his wife Hong Hong Wu standing before The Distant Clouds. The work commemorates the loss of Cai’s close relatives, and is installed opposite the gunpowder painting The Spirit of Painting. Museo Nacional Del Prado, Madrid, 2017. Photo courtesy Cai Studio 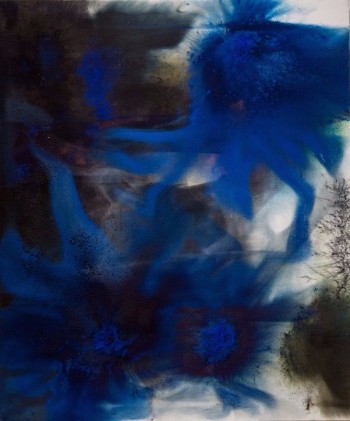 Shift (Zhuan)
The third room suddenly opens and brightens, bringing a new energy; it erupts with color and passion, unleashing “the spirit of painting.”

In Mountain in Heat, layer upon layer of aphrodisiac mushrooms culminate into a mountain that bursts forth with desire. The artist strives to achieve a sense of richness and depth on the canvas, straining between the thinness and simplicity of contemporary art and the profundity and harmony of classical painting, seeking to convey a new aesthetic. 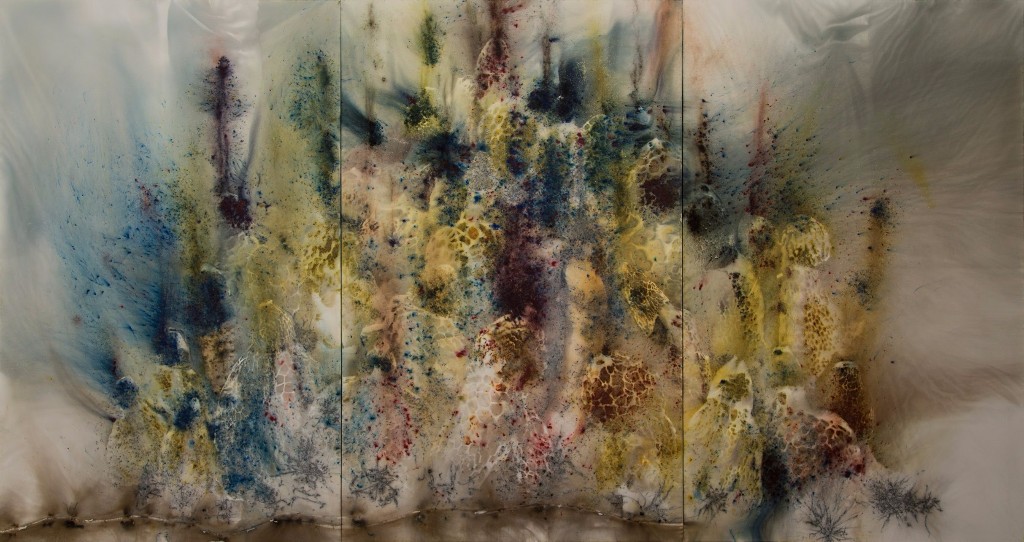 Last Carnival developed from Cai’s study of the Prado’s collection of Rubens, specifically his ability to capture the dynamic movements of man and beast. At the same time, it resonates with Bosch’s The Garden of Earthly Delights. Different species of animals have succumbed to interbreeding, drawing forth an environmental theme in which living beings continue to frolic even when only one pool of water remains on the planet.

Black Poppy features nine canvases; on each succeeding canvas, Cai decreased the amount of black color gunpowder until the coolly elegant black is lifted to reveal the scarlet repressed beneath. The work captures the passage of changing time. “Painting needs to express energy; here, the energy expresses itself,” Cai explains.

The Spirit of Painting was the artist’s grand finale in the Salón de Reinos. Following more than two years spent studying painting and immersing himself in the spirit of painting found in the Prado’s collection, Cai completes the exhibition with a fearless and cathartic liberation through this work. “I imagined the spirituality bestowed upon me by Titian, El Greco, Velázquez, Rubens, and Goya — through this, I imagined a daytime fireworks event for each of them, and together they constitute five chapters,” Cai says. “I envisioned the fireworks effects for each master, and my goal is to capture the grandeur and immense power of outdoor explosions within the 18m-long canvas. I look to unleash my imagination of the masters’ spirit of painting through fierce interflowing of abstract colors; employing their iconic symbols and upturning them in one grand explosion… 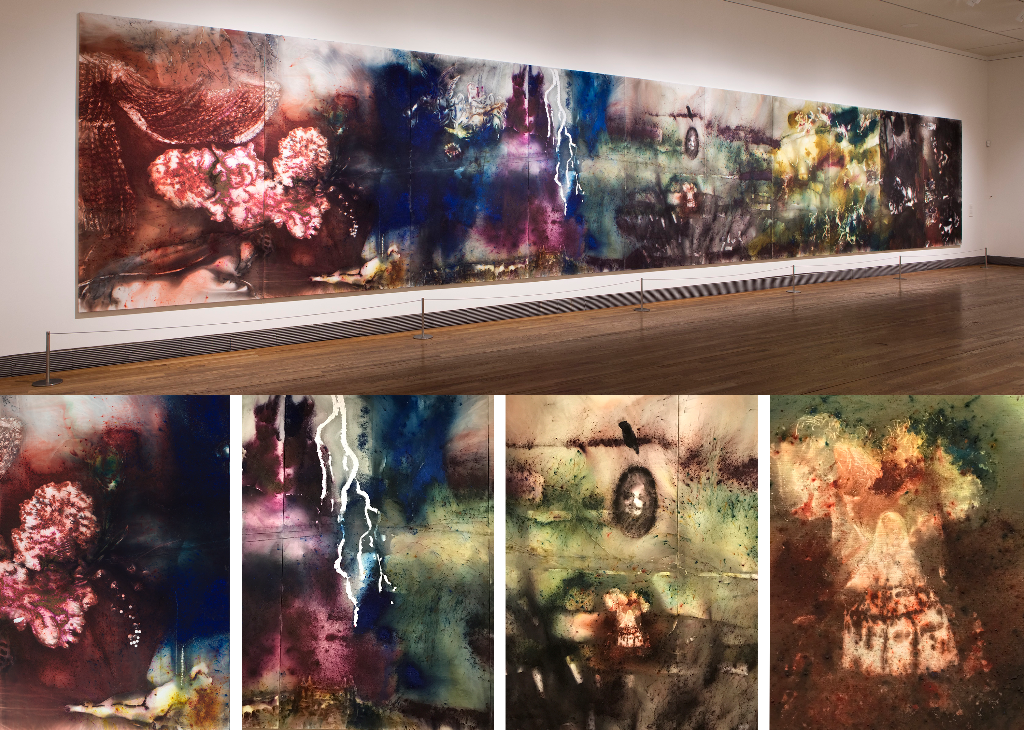 Unification (He)
The fourth room accumulates energy; echoing Rise, it registers a higher level of spirituality.

Salón de Reinos… was ignited in the exact location captured on the canvases. It seizes the shadows of artists such as Velázquez, who competed in the Salón de Reinos. In addition to expressing his reveries at dusk while creating works in the hall over the past month, the artist also includes a phantasmal black line, subtly suggesting a blurring of time-space dimensions. 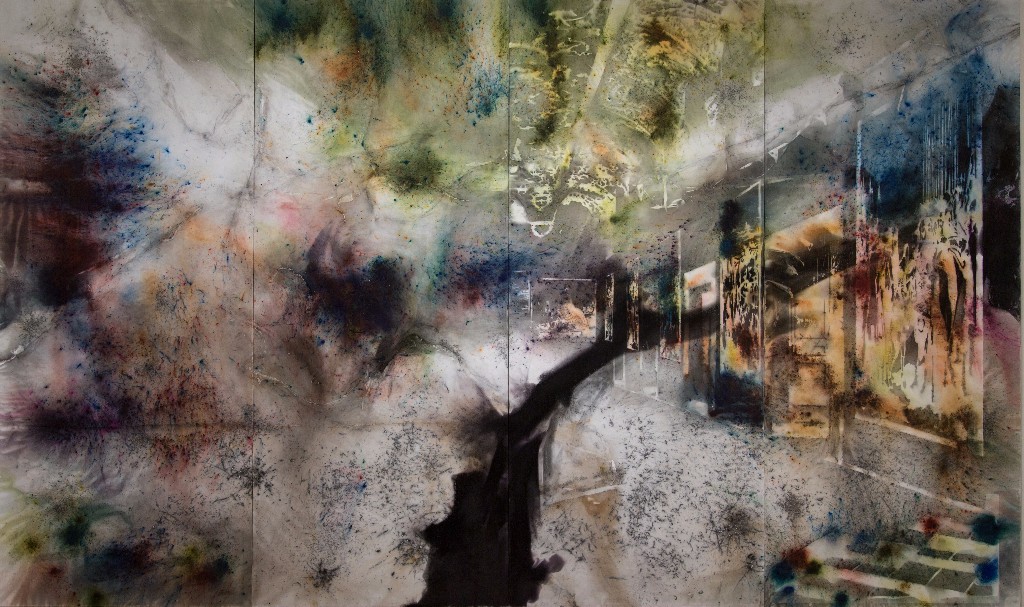 Cai explained that prior to creating Palmyra, “I first attempted to use gunpowder to reimagine Goya’s The Third of May, in order to understand its energy and tension.” This work further acts as “a gesture of empathy from the Prado to a fellow landmark of ancient civilization in the latter’s time of misfortune.” 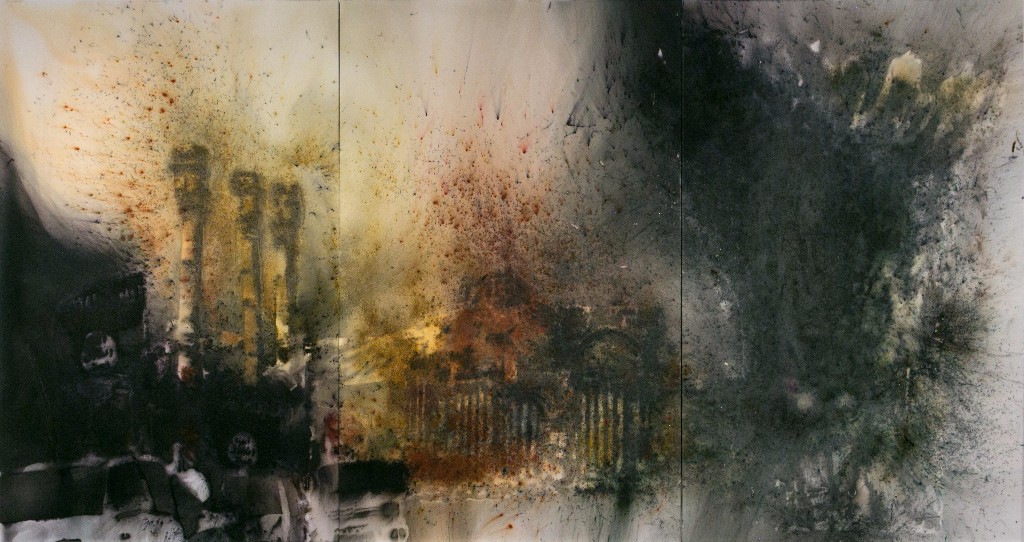 Exhibition corridor between Gallery C and D
A selection of works provides further insight into the origins of and stories behind the exhibition. It begins with Cai’s father’s drawings on matchboxes and two of Cai’s early works in oil and acrylic. This is followed by a recounting of his 2009 travels with his elder daughter, retracing El Greco’s footsteps from his birthplace in Crete to Italy and to Toledo, his final resting place. Select sketches inform the artist’s relationship with the Prado’s collection as well as the creative process behind The Spirit of Painting.

On his father’s matchboxes: “As a child, I watched my father transform the commonplace scenery of our hometown into formidable mountaintops and waterfalls, using tiny matchboxes as his canvas. Throughout my journey as an artist, these matchboxes helped me to understand that painting is about depicting the heart and mind: a thousand acres can exist between two fingers. The fire of Nature symbolizes my continuation of my Eastern and Western predecessors — it traverses cultural and geographical boundaries and returns us to the origin.” 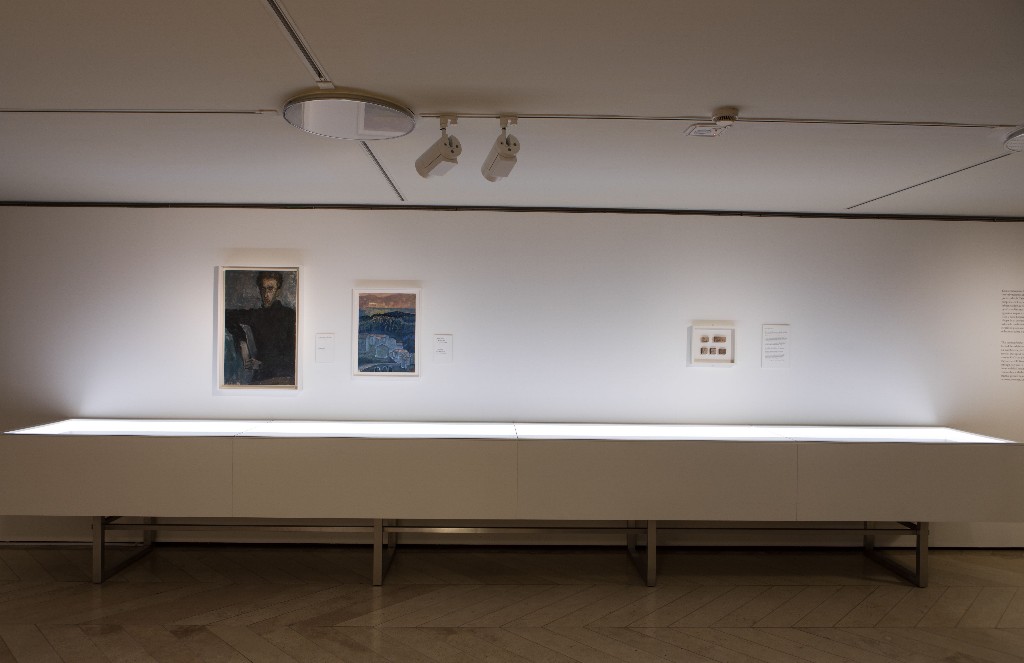 Isabel Coixet, one of Spain’s most prolific and internationally minded filmmakers, has produced a 60-minute documentary film to accompany the exhibition, a condensed 20-minute cut of which will also be on view. “Through the film, viewers will witness the two-year creative process behind the exhibited works,” Coixet said. “They will be able to holistically experience the dynamic charisma and singular beauty of the artworks, and gain an understanding of the artist’s profound pursuit of and reflections on the art of painting.”

Filming took place in New York City, where Cai Guo-Qiang lives and works, on Long Island, in Madrid, during the artist’s residency in the Hall of Realms, and in Valencia and Toledo. It is produced by Miss Wasabi Films for the Prado, and will be released worldwide in late 2017.

The Spirit of Painting will be open Monday through Saturday from 10am to 8pm, and Sundays and public holidays from 10am to 7pm. Guided tours of the exhibition are also offered on Wednesdays at 11am and 5pm. 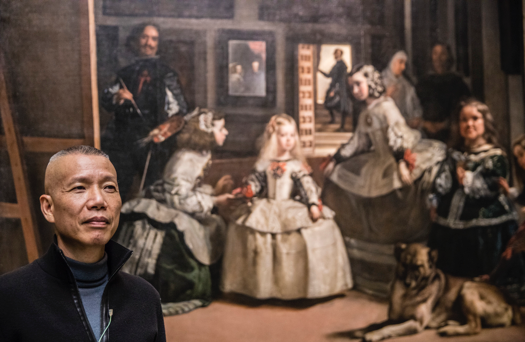